The initial release contains the base Grid Battle Engine, along with the Area of Effects add-on. Additional features will be available when they are ready. Early access patrons get to try the latest features before they're released to the public!

Download the zip file at the very bottom and unpack it in your plugins folder. Then, in the plugin editor, install the following in order

We want to test if the grid actually loads for you, so we  start with the Grid Battle. Each battlefield uses a Grid Config, which consists of one or more Grids. For your convenience, I've prepared two different grids for you, called "Two Grid" and "One Grid". You can click on them to see how they look like, but they should be good enough for testing. 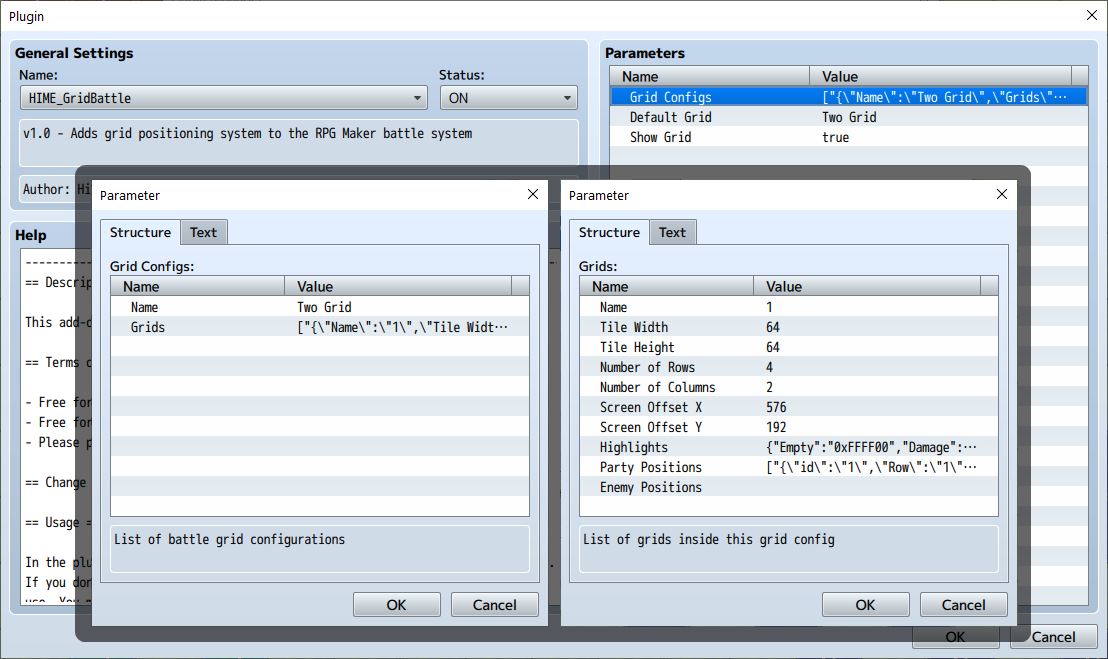 Try out a battle and see if actors and enemies show up on the grid. You should see two grids, with your enemies on the left, and actors on the right.

Next, change the "Default Grid" value in the plugin parameters to "One Grid", and try the battle again. You should see actors and enemies placed on one continuous grid. 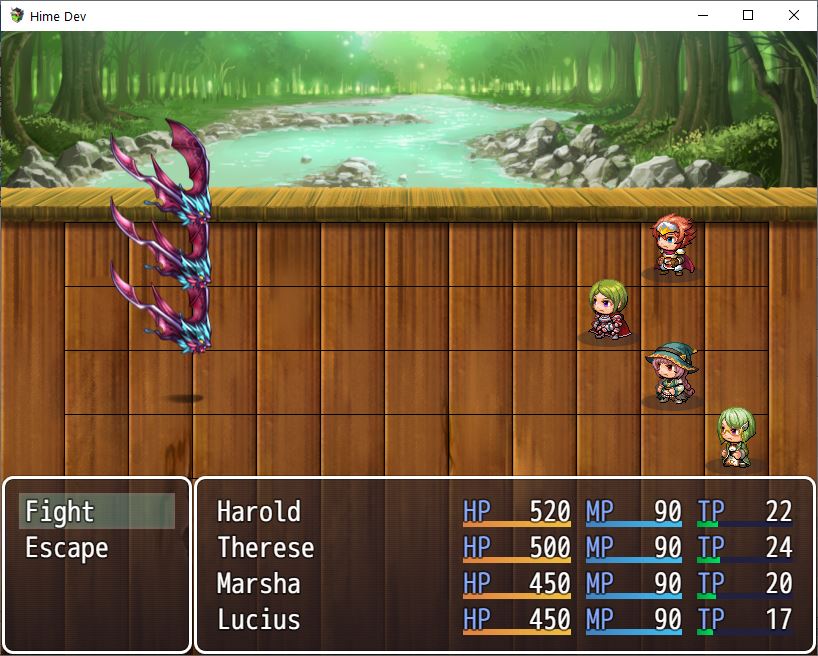 Try some attacks and see if it crashes. If it works, we should be good to proceed to installing area of effects

To get AoE's in your game, install HIME_GridTargetArea under HIME_GridBattle

You should see one plugin parameter for the area of effect map. Create a new map, and change the value to the ID of the new map. Mine happens to be Map 019. Remove the leading 0's.

Now, this map is where you're going to "paint" your area of effects. Go to map editing mode, select the R(egion) tab, and then start drawing some shapes. Each area of effect is grouped by region number, so you might want to give each area of effect their own little space on the map.

Next, create an event somewhere in the AoE to set some area of effect properties.

Once that's done, you've successfully created your AoE. Next, we want to assign them to a skill.

To assign an AoE, simply note-tag it with

Where the NAME is the name of the AOE that you created earlier. In my example, I call it square3x3center. 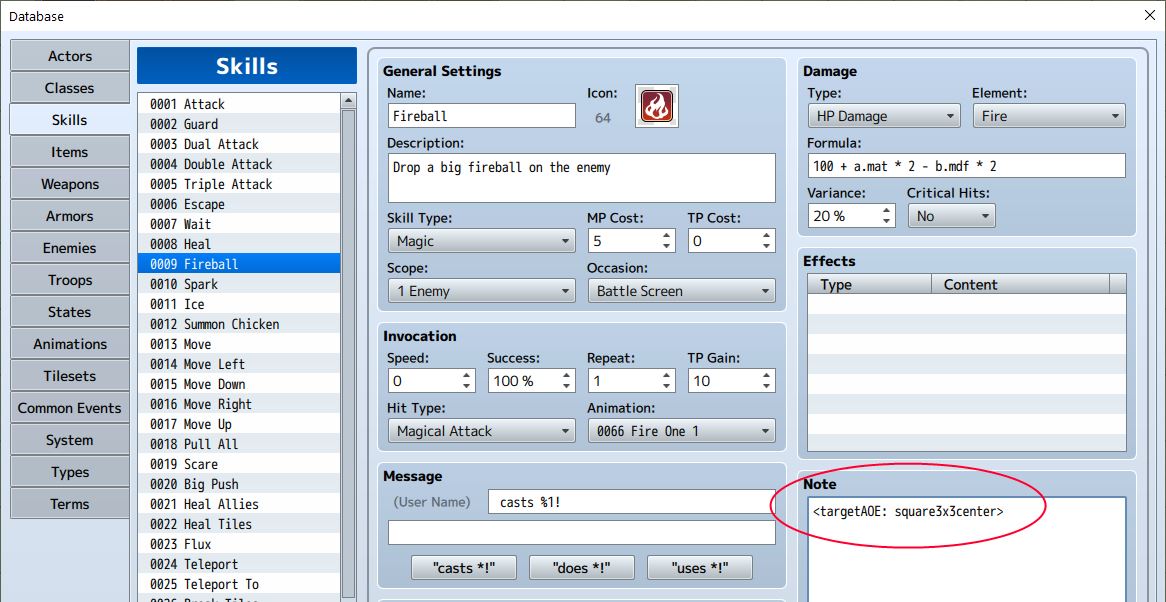 Finally, you can test it out in battle and see if it works! 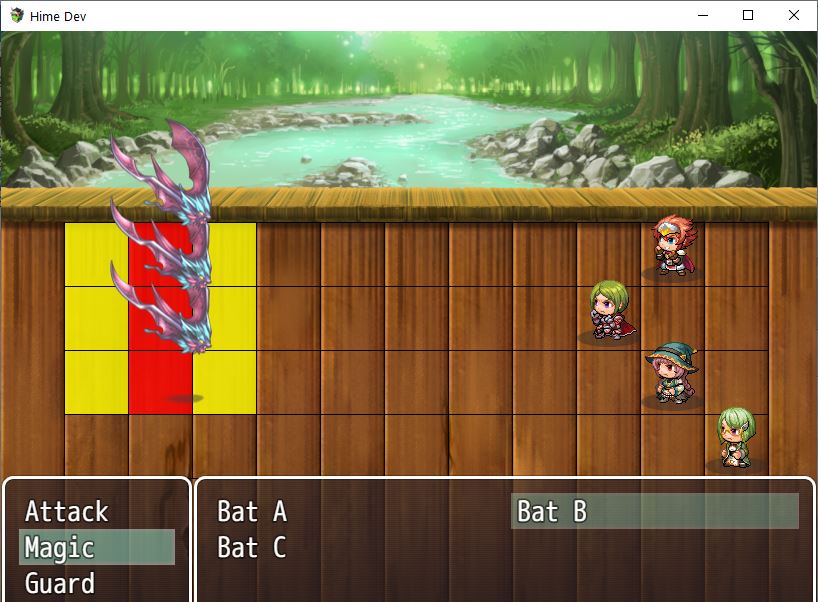 If everything works up until this point, congratulations, grid battle engine might work in your project!

I love the idea and I'm going to experiment with it.

It's just too bad that this isn't compatible with dragonbones :*(

Or at least it doesn't work on my project...

This is amazing. Thanks for making it/sharing. I definitely want to try this out when I get a chance. Out of curiosity, is there any special enemy functionality as of now/planned?

Aside from enemies being able to automatically get area of effect with their skills (because the AoE is tied to skills), there isn't anything special for enemies specifically right now.

There's a "large enemies" plugin in the works, where you get to specify that a monster takes up multiple tiles. Maybe it takes up 2x2 or 3x3 square, or it takes up the entire battlefield, or something. Could probably be generalized to actors as well.

I did a little "map battle" concept where I pulled events on the map straight into battle, and played around with the idea of "talking" to events. So like in fire emblem where you could interact with other characters, I was thinking maybe you could "talk" to an enemy and turn them to your side.

This could potentially be done for two-grid system as well, where you basically assign events to each enemy and then somehow trigger the events.

Very cool! I look forward to what you come up with.

The question is, can the tile color be adjusted? In addition to the yellow and red samples.

Currently, the plugin parameters for each grid let's you choose highlight colors for tiles, based on action type.